Daan Tech is an industrial company which designs, produces, and markets innovative devices that respond to the challenges of the 21st century.

The first product created by Daan Tech was Bob the mini dishwasher– the smallest, fastest, and most advanced autonomous dishwasher.

Bob addresses two challenges facing our world: smaller average households and living spaces, and the lack of circular economies. It allows one and two-person households to have an efficient and durable dishwasher in their homes to save water and time, and it has been designed for a closed-circuit economy free from willful ignorance about the environment.

Daan Tech was established in 2016 with the vision of creating household appliances and products that lower a household’s environmental footprint while being functional and elevating the market standard.

Since Daan Tech has been incorporated it has cultivated deep know-how about mechanical design, plastic injection, hardware electronics, software development and product integration within its 2,500 sqm factory located in Vendée, France.

Its know-how stems from the experiences of a former leading home appliance factory located in Western France, which manufactured home appliances for decades and had 3000 employees at its height.

Since its incorporation Daan Tech has grown thanks to the many talented individuals wanting to do meaningful things as their job. Today, they are continually developing Daan Tech in France and abroad, and contribute to its success.

Though French-rooted, Daan Tech has the ambition of being a global company and exporting its solutions worldwide, as we understand no 21st century problem only applies to or can be resolved by one country.

With this vision we hope to reinvigorate local industry and improve individual lives, households, and society as a whole. 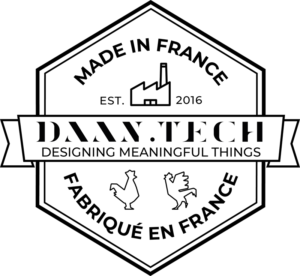 Designing Meaningful Things for all those around the world who will join our company to increase its impact, and the billions of others who will use our solutions.